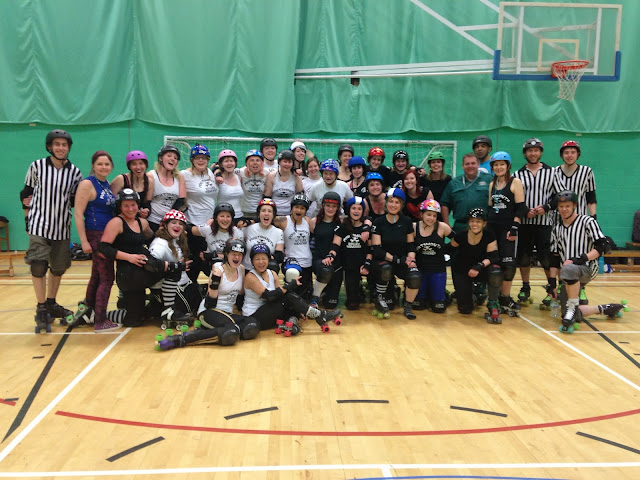 Another early start on another Sunday morning when all participating Screamers converged at the Leisure centre for the convoy to Portsmouth for a bit of training and a mixed scrim. As ever nerves were present but were partially allayed by the few who had previously been to Portsmouth skating in a mixed scrim and could relay a few details about the super-organised and rather hardcore Portsmouth ladies.

Of course, a few of us managed to get lost and on seeing a massive cruise liner in the harbour, we were seriously considering how we could sneak on board. We could always blame the sat-nav. But the one-way system swept us away from France and back to Portsmouth and reality. Thank goodness for texting…..”we’re lost” being a common text for a Screamers Road Trip usually followed by  lengthy directions consisting of passing landmarks such as pubs, parks and generally dodgy places. And today, we even got there early enough to have pre-training snacks, obligatory cups of tea and a brief relax in the sunshine. Is it me, or have we spent some of the hottest, sunniest days sweating in various Leisure Centres this year? Apparently it’s been a beautiful summer!

The Portsmouth venue was eerily quiet. The hall where we were skating was bright, shiny and packed with skaters and refs, eagerly getting kit on. Quite a few of them were changing wheels, the floor in here was renowned for being quite slippy and fast.

We had a three hour session to look forward to and were immediately called to get on track and the warm up began. We were worked super hard by Tilly of the Wenches, putting us through our paces, and the Screamers all got right in there and gave their best and sweated pints. The super slick floor was a bit of a problem to start with, although if you did go down, it was satisfying to be able to finish with a superb bit of sliding!

When it came to the mixed scrim, the nerves that had passed earlier were straight back, the Screamers now had a few Wenches in their ranks and the pressure was on. Our bench was run like clockwork by Portsmouth and it was a super fast game, incredibly hard hits and even some apex-jumping by the Wenches. The scrim seemed to be endless, it actually went on for way over an hour and everyone was skating incredibly fast. It was to date, the hardest session of my life and by the end I was hurting literally from head to foot.

One of the most important things I learned that day was how the Wenches ran their line up and bench to perfection. An organised, quiet bench with the next line-ups ready to spring to the jam line. Knowing what you were going to do before you  actually get on track helps so much, a bit of calm before the storm of the next jam but knowing what your team mates are going to do too.

We were all made incredibly welcome by the lovely Wenches and really appreciate the knowledge they shared with us. After the customary super quick wet-wipe-wash we all hobbled off to a local pub for a celebratory drink before the long drive back, shattered, exhausted, a little bit stinky and just plain grateful to still be alive and in one piece.

Posted by Devon Clotted Screamers Roller Derby at 14:33 No comments: