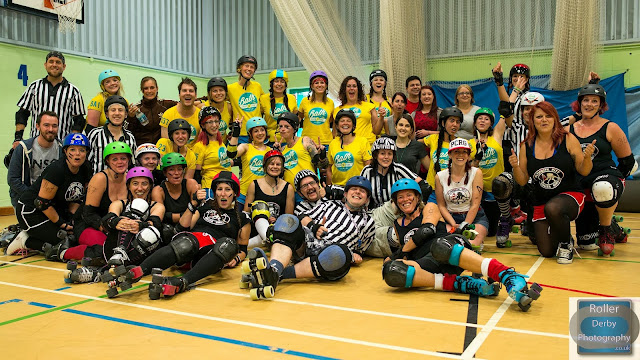 Ok so we get the message on Facebook that our Derby Crush team need our help to boost their numbers for a closed scrim with our other favourite team Bath Roller Girls (our sisters from another mother). 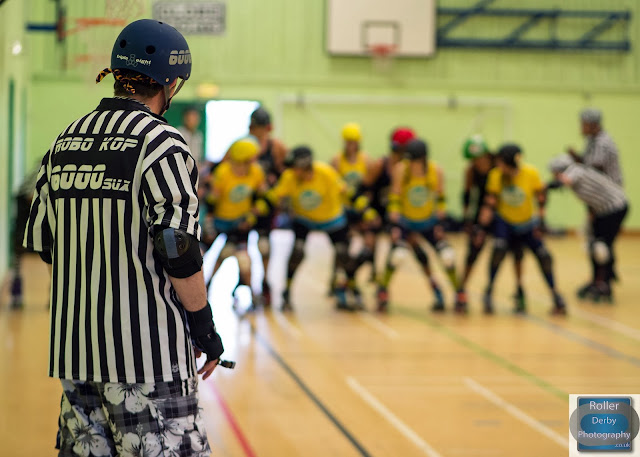 Michelle (Rolls-Moyse), Catharine (K-tea Claws) & Kim (Kimi Krusher) took up the challenge and headed to Bristol early in the morning to meet up with the Plymouth B team, after a detour Screamer style and nearly going to the wrong venue we arrived safely a little nervous and asking ourselves “what the hell are we doing” but also a little excited and happy to see both teams, Hugs all round. 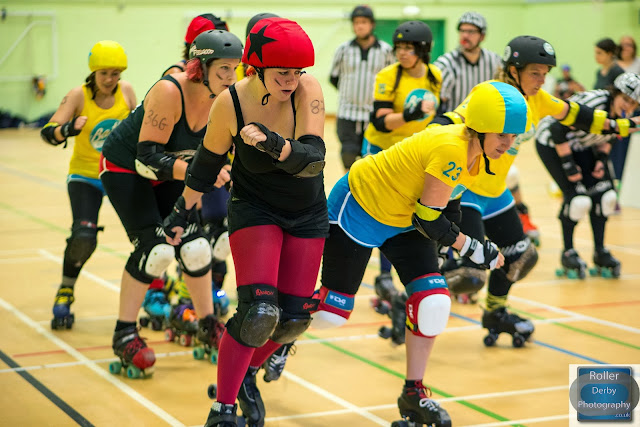 First the awesome PetraBomb put on an amazing warm up session then it was game time. The whistle blow to start the first jam! Surprisingly all was calm, Rufus Pound amazing Bench Coach had everything under control, groups set out in order of play, I remember one person saying if you squint your eyes slightly the Bath Girls look like Minions! That was it! You know the song! Every time I stood at the line up P.O.T.A.T.O……… 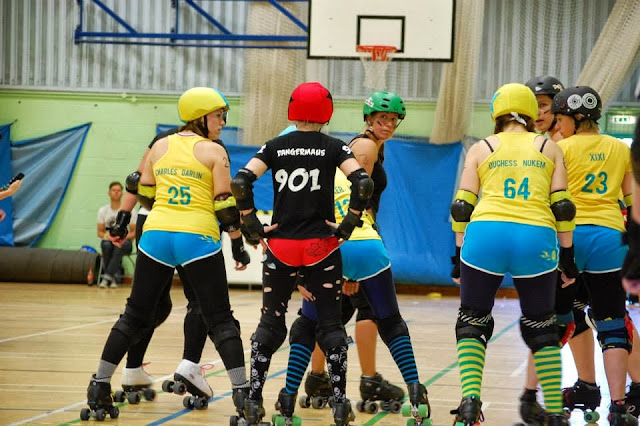 We Screamers learnt so much from skating with Plymouth B team & especially Dre-Feelgood, We would like to thank Plymouth B for inviting us to skate with you and if you ever need us again just give us a shout 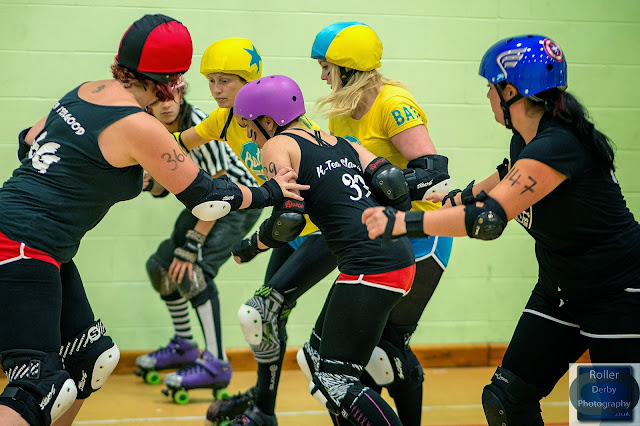 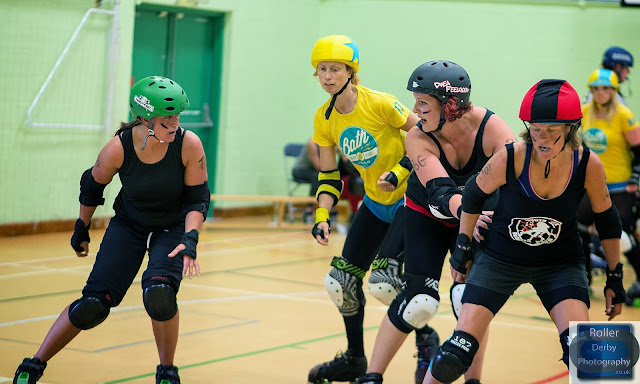 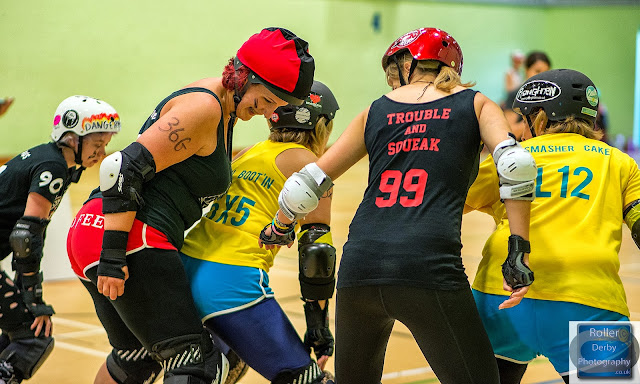 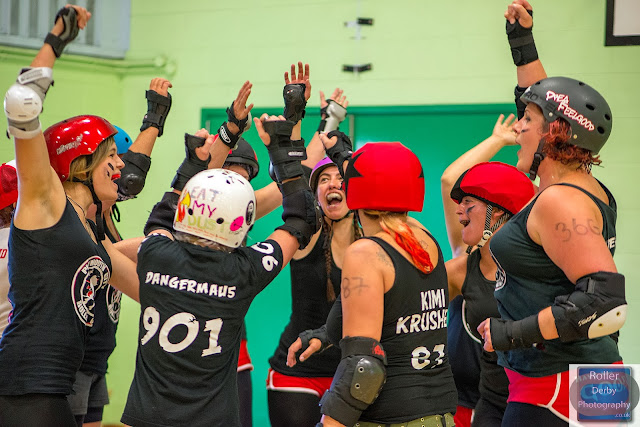 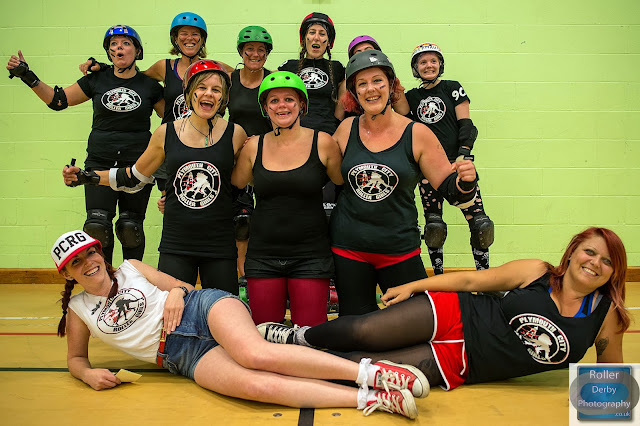 Posted by Devon Clotted Screamers Roller Derby at 09:25 No comments: 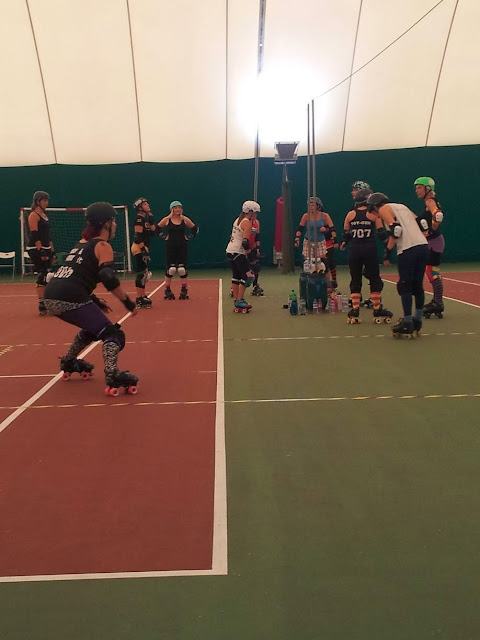 After meeting up at the leisure centre with some of the Bath girls (who were a little worse for wear) and hauling kit into the mini bus we set off  on the long journey to Penzance - we hit difficulties in Bideford just 10 miles away following Jerrys directions which we luckily ignored and listened to Catherine instead!

We made fairly good progress along the Atlantic Highway - stopping on one occasion for a vomit break and another for a shopping trip/ snack stop somewhere in Cornwall.  There was much hilarity about being in "Bush" or "Bushy" cant remember which but it is just before Bude and there were a few attempts by Tony to injure us before we had even started. The venue was a temporary blow up structure over tennis courts and it was really hot inside, it was  hot out but even moreso inside. The surface was also something we were not used to - it was really grippy which was good for some people but it was really difficult to do any stopping - you either could not stop or stopped dead!
After meeting our hosts we did an hour of warm ups and drills which were really good and then we started our scrim.  The flooring was a challenge to us - but we did our best, we puffed and sweated and tried our best but sadly we did not win, however it was a brilliant game and everyone enjoyed it.  The penalty box got destroyed on one occasion due to an inability to stop but other than that there were no major mishaps. I was got lead jammer at the ends  and scored 5 points - something that possibly will never happen again and Tony says was a fluke - but there you go!  The Bath girls played valiantly and were invaluable to the team.

Afterwards we went down to the sea front where some of us - namely  Su - braved the sea for a dip and some fish and chips and then we wound our way merrily home, tired but happy!!!
Posted by Devon Clotted Screamers Roller Derby at 08:23 No comments: