Not ones to shy away from a challenge 4 screamers went on a road trip to Truro. Even though only 3 of us were skating all four of us were nervous, chatting on the way there saying things like, “why are we doing this again?” “We could turn round and have lunch somewhere”. Despite the nerves we carried on driving arriving at the venue with time for a nervous wee and chocolate bar. McSu reported for scoring duties and secretly cheered us on from the side. Vicious Smit was on the black team, but Beta Max and I were on the white, oh no the Screamers were split up, what would happen?

What happened was an amazing scrim. Max was awesome as a jammer and there was loads of fancy footwork. Vicious was a brilliant blocker and her pivot skills shone through. I, on the other hand got hit in the nose and had to sit out of a few jams but still had a go at the end.

It may have been the beginners scrim but it was so much fun and everyone there was welcoming and great to play with. I’m sure we’ve seen a few of the ladies since then but it would be awesome to have another one of these in the near future.

Posted by Devon Clotted Screamers Roller Derby at 14:36 No comments:

Another 3 hour Saturday training session but at least we didn’t have to get up at dawn, unlike the Bath Roller Derby girls who were paying us a visit today for a Mumbles training session and an informal scrim.


Even though informal it was actually a bit daunting to see all the Bath ladies appear in their brand new yellow tops and blue shorts, their kit looks awesome, and compliments ours well too!


It was great to see we Screamers had almost a full team of able skaters today, always takes a bit of pressure off everyone, even though it was just a friendly.


So for two hours we were put through our paces by Mumbles, working us hard on agility, drills, stamina and a little bit of fun thrown in here and there. Paceline work was brilliant with so many skaters as well as being an ideal time to get to know everyone and every skater worked and sweated hard.


The third hour was scrim time, a basic scrim as we were short of refs, but everybody mucked in and skated hard and played really well. Both teams were just as determined to play to their best and it was a hard-fought game. We really love those Bath girls, another new team like us, so we have a lot in common and always enjoy getting together with them.


After the scrim it was of course cake time, with some gorgeous Devon Clotted Screamers cupcakes, complete with our logo and glitter. We certainly all love cake on this team and it’s amazing what we’ll put ourselves through for a nice piece of cake and a cup of tea. And then a sambucca or two………..

The tough two hour training session didn’t put the Bath girls off us as the Screamers were invited to pay a return visit to Bath for a closed scrim on 14th July 2013. 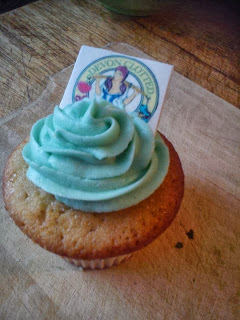 Posted by Devon Clotted Screamers Roller Derby at 14:35 No comments: 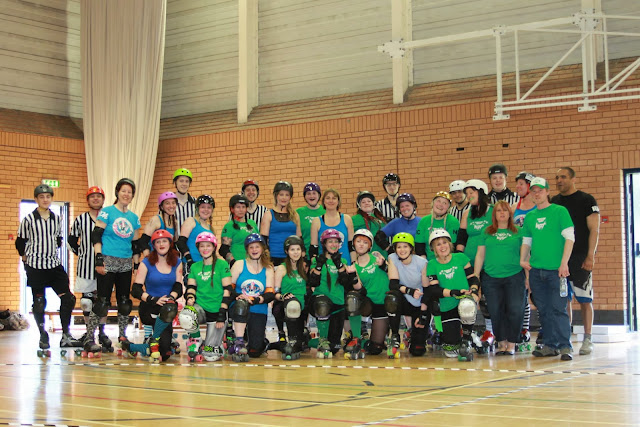 Or as I like to call it “The bout that wasn’t a bout but actually was a bout”.

It began as the usual  invitation to go off on a weekend jolly to Newport for a nice little skate with some welsh ladies…well, that’s what we were all led to believe when the date was first put into our diaries.

On the day, the usual malarkey ensued: getting up ridiculously early for a Saturday; sandwiches to make; flask of tea to brew; emergency tin of pop; plenty of water; sweeties and making sure we had the not-so-trusted sat-nav which always seemed to get us there, but has a habit of re-directing us to Aberdeen for the journey home.

We’d already had a training session at home run by Hazel from NPT so everyone was fairly calm as we would recognize a few faces and were expecting it would be a similar day again, only on their home turf. How wrong we were.

As we turned up in Newport and entered the smart sports hall, it became immediately obvious things were a bit more serious. NPT were already in their team kit, warming up on track and looking a bit, well, dangerous. Referees and official-looking people with clipboards were milling around and there were even people there to watch the game. Mild panic set in, legs turned to jelly, and waivers were signed, illegibly in my case as the shakes meant I couldn’t hold a pen. We didn’t have a full team of Screamers so a couple of the lovely NPT skaters were in blue and ready to skate with us. Before I knew it and before I even had one skate on I was in the middle of the track for the pre-game Captain chat, now it was getting really serious. Then it began……..

From the first whistle the pace was really fast and as ever, the game was a bit of a blur. As soon as you are on track you have no time for fear, adrenalin kicks in. Still being very new to this derby game at this point we did amazingly well, our walls were getting stronger and we were even hitting some players off track. Slowly and surely we were working together as a team and points were being scored by the Screamers too! As we were short of skaters it was pretty much a constant game of being on track as long as you could still breath. Three jams in a row for our skaters was normal in this game, all that stamina training had definitely paid off and everyone did superbly.

The relief at the final whistle to be alive was overwhelming, sweaty hugs all round and then off to the pub in welsh convoy for celebratory/obligatory booze and more chat about everything derby.

Everyone that day was amazing, we are so thankful to NPT for welcoming us, we learnt loads and are eternally grateful for all the support and encouragement shown to us by their skaters and refs too.……..and for giving us a proper battering! We love it!

Posted by Devon Clotted Screamers Roller Derby at 14:34 No comments: