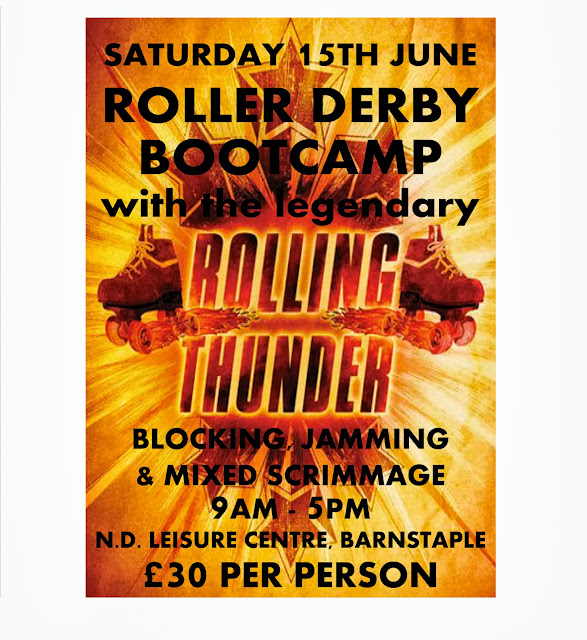 Devon Clotted Screamers present the Epic Rolling Thunder Bootcamp.
Saturday 15th June 2013
What a day!! This was one of those learning curves we will never forget, it was our first event open to other skaters and we were all nervous as to whether it would be a success or not.  We really needn’t have worried because my word, apart from the obvious leg incident and a near miss with a helmet; it was a brilliant day, with skills and fun being had all round. 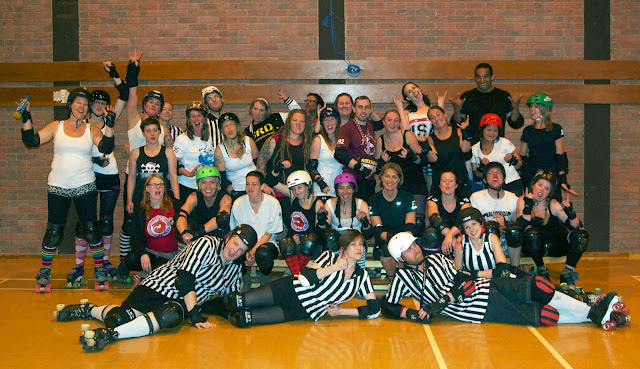 Sadly as with any bootcamp a few skaters had to drop out but we were still sell out with extra skaters appearing to get in on the action, waivers were being signed all over as the hall buzzed with adrenaline.  Then the first part of the day kicked off, skating skills and tactics.  In my opinion the sitting down and talking tactics was great, it helped me to see when some plays would be an advantage and when some should be avoided like the plague.  It also helped me realise that slowing someone down and getting in their way was an effective way of blocking, so all those big hits that I kept trying to get and landing on my own rear end, were now safely changed to sticking my bum out and just wiggling it with purpose.  It was during one of these drills when one Screamer had a bit of an incident, which required morphine and a stretcher, as well as cast and a few pins later on. You’ll all be glad to know that Sarah is now back on skates and getting back into the swing of things.


After that we decided to be more cautious and started running on our top stops until we felt like we were going to fall over, or in my case did!  All was going well until we started racing and Cherry Blitz fell, hit her head and as she did her helmet rolled away……..Scary! I forgot all about the race aspect and stopped asking if she was ok, fortunately she was, but oh my word, phew.   At this point we had a few pointers about helmet sizing which was great advice. Basically if you can tip your head upside down with the helmet on and it stays on it is the right size for you. That was advice we all certainly took on board. As if top stop running wasn’t scary enough, we then started to jump the apex. Not being a natural jumper and having just had a cast off my wrist I sat out of this, but it looked great fun and it was brilliant to see everyone gaining confidence the more they did it.

Lunch came and went rather swiftly, just giving us time to fuel up for the scrim. Armed with our black or white tops, we were divided up and got straight into it. It was awesome. The points were racking up for both teams with some great  play from everyone, even Rolling Thunder himself sneaked a couple of jams in, much to Danny’s delight as he got to jam against his Merby crush, there was much love of the track at that point. Whippety Split gave Mr Thunder a run for his money, blocking him when she could, determined not to let him pass, was great to see.   Unfortunately I can’t remember the score as it was over so quickly, all I know is it was a great day and not only was there huge amounts of derby love pouring into the room but also a huge amount of information spilling out of our full heads