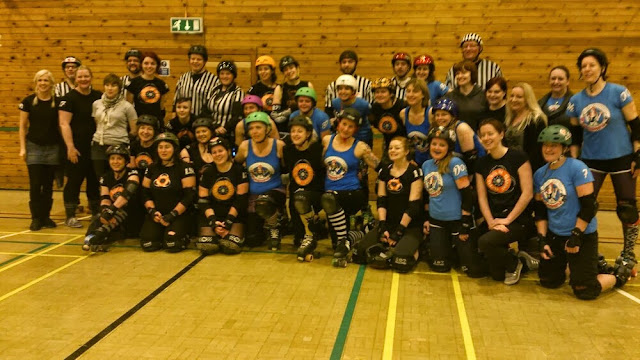 
It was a cold and rainy day in Gloucester.  The mini bus pulled up outside the leisure centre and out stumbled the Devon Clotted Screamers, clutching their roller skates and helmets with a hint of confusion on their faces. Crackling with nervous energy, finally the day had come when they would be playing against another team of roller derbyists. After a couple of deep breaths we mentally prepared ourselves and entered the arena.The Severn Roller Torrent girls were the first team to welcome us into their fold and you couldn't have asked for a nicer more welcoming bunch of girls. It was like we had all been bosom buddies for years. The track was laid and we had about an hour of skills and drills with them, swapping stories, comparing wheels, talking about derby life in general. It was cool.  Then the moment we had been waiting for. Practise was over, it was time for the game. Ooh err missus! Numbers got applied to arms, our esteemed captain, Coxy and I were called over to the refs to discuss what was going on, and to be honest, we were both like wide eyed little kids who had gone to Disney for the first time. We had heard all about it, were happy to be there, weren't quite sure what was going on and then it began. We lined up for our first scrim against other people!
Yes, we had the look of rabbits caught in the headlights, and to be honest it took a couple of scrims to get going. It was a great game, the SRT girls were happy to coach the Screamers at the same time as playing against them. It was awesome.

I can’t begin to say how extremely grateful and how lucky we were to have our cherries popped by such a smashing, helpful and all round great team that is SRT. Toward the end of the game a mighty cheer went up from our benches we got our first ever lead jammer courtesy of Michelle Rolls-Moyse, who went on to score 5 points!  If I had the ability to cry there and then, I would have given it serious consideration.  The final whistle went and there were loads of exhausted but happy Screamers who had finally done it. We had played a derby game. To quote american adam' Alright, Good Job!’ Lots of high fives and sweaty hugs, people got out of their skating gear and in what is derby tradition, we head to the boozer for a celebratory drink.

It was a great day, skated by great people. I personally can't thank Hannah and SRT enough for allowing us to come and skate with them. Double thumbs up and loads of derby love from the Screamers to SRT. We have a return match in October and everyone is really looking forward to it. If it's half as good as the first time it will be a brilliant day with brilliant people.