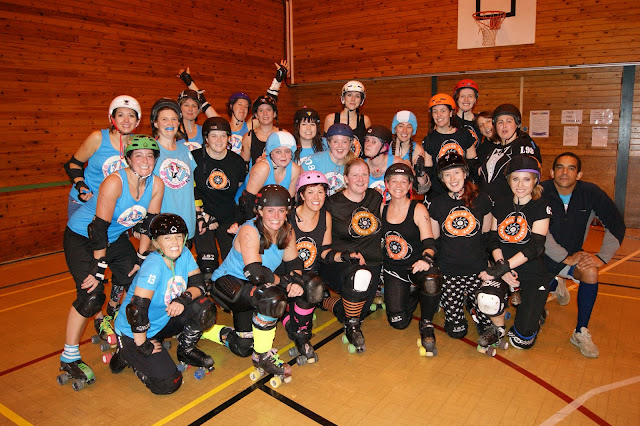 As HNSO, Treasurer, club Secretary and general sorter outer of stuff, I’ve never actually seen my beloved Screamers play without having some official role to do.  I decided that for our away game to SRT on the 26th October 2013, I would come along as a spectator/cheerleader and would have no ‘official’ role on the day except for cheering my girls on.

We all made it to the rendezvous point, boarded the minibus & trundled along the North Devon Link road to Gloucester.  In true Screamers style, and in spite of having printed directions and a satnav, we got a little lost, but found the venue with plenty of time to spare for getting kitted up, intros to the lovely ladies of Bath who were joining us as Honorary Screamers for the day, hugs to SRT & the normal pre-match rituals before the first whistle blew.

What. A. Game!  Last time we were here, it was our first ever game and we totally had our skates handed to us. This time, things were a little different.  To quote an esteemed Referee “Screamers have come a long way, the difference I see from the last time to this – DCS has changed from a group of girls who skate together to a Roller Derby Team”… SO proud!  We still have plenty to learn - not least that I do NOT make a good spectator! ;-) 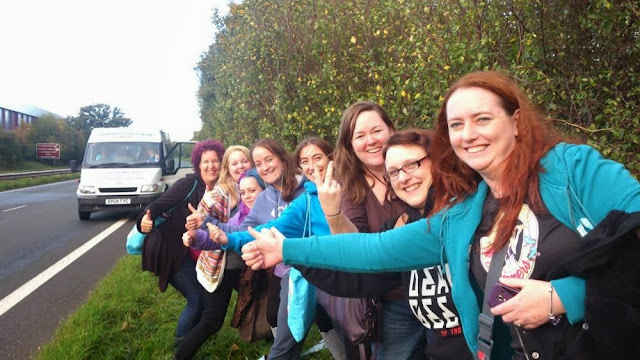 As tradition dictates, we all headed to a nearby pub for post-match food & drinks…the alarm bells should have started then as Coach Mumbles couldn’t get the minibus into reverse, the Screamers used pushing the bus as a warm down, we realised we had forward gears so off we went. Stuffed full off food, we left the pub at 4pm and headed off in the direction on the M5….2 miles from the motorway, we could see Mumbles struggling in the drivers cab, then a loud ‘clunk’ as the bottom of the gearbox fell out of our hired minibus!  Laughing our heads off, we duly trooped off the bus, set up the warning triangle & phoned the RAC.  “We’ll be with you in up to 75 minutes…”  A few hardy souls scouted the area & located an Asda about 15 minutes walk away so 9 of the 11 trooped off there to wait it out.  An hour or so passed and we got a call to say they were having trouble getting a recovery truck big enough for all of us and offered us hire cars instead, we nominated 2 drivers and advised the RAC that we only had the photocard sections if our licenses, which we were assured, would be fine…  It wasn’t…. as we discovered 2 HOURS later when they called us again to say they were sending taxi’s to take us to the local car hire place!  This was when I went into ‘Angry Bats’ mode and demanded taxi’s to take us home, the minibus was already on the back of a recovery truck, but there was only space for 2 of us in the cab…  The lovely Chris from the RAC agreed & went off to make the arrangements. 40 minutes or so later, 4 hours after we initially called for help, a nice 7 seater taxi driven by the lovely Paddy arrived, and Paddy assured us that another car was following in a few minutes.  Hurrah! Saved!... And then my phone rang… It was RAC Chris.  Telling me that the 2nd taxi had been cancelled!!  AArrrggghhhh!

Apparently, there was some waffle about the cost being over the amount the RAC would pay, and that the tow truck guy was supposed to be able to take 6 of us!!  Before I blew my stack, we bundled 7 Screamers into the taxi to get them on their way whilst RAC Chris went off to try to solve the problem.  I told tow truck guy they he was supposed to take us which was met with a shrug of the shoulders, and, after a phonecall to his boss, a suggestion that we should “just get a taxi home, pay for it & try to claim it later!”…. Thankfully, Chris called again and at 9pm, So Solid Sue and I were snuggled up in a taxi with the lovely Dave driving us back to Devon with Mumbles and Ace of Chase in the cab of the recovery truck bringing up the rear.
At Midnight, 8 hours after breaking down, and £714 in taxis (on the RAC’s account!) Mumbles was last Screamer home, sticking to the letter of the Royal Marine’s code of ‘Never leave a man behind’ to which we are all eternally grateful!

The moral of the story…. Don’t ever think that the RAC will rescue Damsels in Distress.